Growth hormone (GH) is a protein hormone made by the pituitary, a gland located at the base of the skull. It was known for many years that growth hormone is needed for children to grow. The pituitary gland not only produces GH, but releases (secretes) GH into the bloodstream. Growth hormone is secreted in pulses and most of the time the pituitary does not secrete growth hormone. GH goes to the liver to release a large protein called insulin-like growth factor, IGF-1. This protein used to be called somatomedin C. IGF-1 goes to certain tissues, especially bones, and results in height increase in children.  Damage to the pituitary gland in children results in low GH secretion in children, resulting in poor growth and resultant short stature. GH can be given to children to restore their normal growth and development.

Over the last 25 years, it has been discovered that adults need GH too. Like children, adults can be given this hormone if deficient. Since adults have already achieved their genetically determined height, loss of GH does not impact height, but it does affect the body in many other ways. If adults have a deficiency of GH, major changes to the composition of the body results. These changes include loss of muscle, accumulation of fat, especially in the abdomen, and a decrease in the density (but not the length) of bones. Because GH is also necessary for normal brain function, adults without this hormone have psychological changes in addition. Patients with GH deficiency may have a lot of joint pain and many patients with fibromyalgia have been incorrectly diagnosed and are actually growth hormone deficient. Patients with growth hormone deficiency often have trouble sleeping, which can lead to daytime fatigue. This article will focus on describing the GH deficiency syndrome as it applies to adults, and how it is currently diagnosed and treated.

There are three main components to the adult GH deficiency syndrome. These are body composition changes, blood lipid (cholesterol and fat) changes, and psychological changes. Because GH maintains muscle and fat, loss of this hormone results in a decrease in muscle and in an accumulation of fat. The decrease in muscle translates to poor muscle function and decreased exercise capacity. The increase in fat occurs under the skin, but also in the abdomen or, more specifically, inside the abdomen. This location is referred to as visceral fat. Medical science has discovered that visceral fat accumulation is especially dangerous because it is associated with an increase in the aging of blood vessels, referred to as atherosclerosis. The blood lipid changes reflect the fat deposit changes and are all in the wrong direction. More specifically, there is an increase in the “bad” cholesterol (“LDL cholesterol”) and a decrease in the “good” cholesterol (“HDL cholesterol”). There is also an increase in the blood triglycerides, another circulating fat, which is associated with blood vessel aging.

The psychological changes associated with GH deficiency have been extensively studied.  Patients who develop GH deficiency seem to lose energy. Loss of energy is often the guiding symptom which prompts further investigation. Many individuals with pituitary disease, especially those with other hormone deficiencies, realize that something is missing. Frequently, it turns out to be a deficiency of GH. Individuals with this problem, or their spouses, also notice a loss of interest in their usual hobbies or activities. A decrease in sociability referred to as social isolation is another symptom. Patients suffering with this symptom do not like to go out and meet with their friends or social acquaintances. Patients may also develop mild depression or decrease in sexual function.

GH deficiency in adults occurs because of some type of injury to the pituitary gland. GH is the first hormone to be affected if the pituitary gland is injured. Injury usually can occur because of the presence of a pituitary tumor, or pituitary surgery or pituitary irradiation. It can also be caused by trauma to the gland or, very rarely, inflammation. In 2008, Dr. Friedman and his colleagues published a paper showing that small pituitary tumors (called incidentalomas) may also cause growth hormone deficiency. As many physicians including endocrinologists, either do not know about adult growth hormone deficiency or “do not believe in it”, patients who suspect that they have growth hormone deficiency need to see an endocrinologists with expertise in this area who can make the proper diagnosis. As GH can be damaging (including leading to an increased chance of cancers) if given to people who are not GH deficient, it is important to be properly diagnosed. Additionally, some physicians referred to as anti-aging physicians will often give GH to people who are not GH deficient, thus making it more important to be properly diagnosed. Because GH is secreted in pulses, GH is commonly undetectable in normal individuals as well as in GH deficient patients. A blood GH level taken randomly, in other words, is usually low and is not worth getting. For this reason, endocrinologists need to find another way to prove deficiency of this hormone. This is done by checking to see if stimulating the pituitary releases GH. There are various ways to stimulate the pituitary to release GH (called “GH stimulation tests”). If your physician thinks you may be GH deficient, he or she will usually pick one of the standard tests. An older test is called an insulin-tolerance test (ITT), in which a patient receives insulin and becomes hypoglycemic (low blood sugar), prompting the release of GH. The testing for GH deficiency is done in the outpatient setting and usually takes about two to three hours. You should not eat prior to the test. This type of stimulation testing is not only necessary for medical diagnosis, but often for insurance purposes. Other tests include the glucagon stimulation test, L-Dopa test, arginine test and arginine-GHRH test

Dr. Friedman used to use the arginine-GHRH test to diagnose GH deficient. Unfortunately, the company that made GHRH decided not to make it anymore. Dr. Friedman carefully reviewed the literature on growth hormone testing and decided to replace the Arginine-GHRH stimulation test with the glucagon stimulation test. This test has been used in thousands of patients, is very safe and is excellent at distinguishing between normals and growth hormone deficient subjects. Dr. Friedman will often use the GH level of 5 ng/mL as a cutoff, although the Endocrine Society uses a cutoff of 3 ng/mL. Patients with mild GH deficiency may have a level between 3 and 5 ng/mL and are worthy of a trial of GH. Patients with GH less than 3 ng/mL are GH deficient and should be treated. Glucagon stimulates GH by several mechanisms. It causes a rise and then drop in glucose levels and the drop in glucose may signal an increase in GH. It may have metabolites that directly stimulate GH. It is also thought to stimulate GH via norepinephrine. Dr. Friedman wants to avoid using the ITT, as hypoglycemia occurs during the test that can be both dangerous in patients with heart problems and unpleasant for the patient.

In 2018, the FDA approved the use of Macimorelin (Macrilen) as a Diagnostic Test for Adult GH Deficiency. Macrilen is a Ghrelin agonist that binds to the GH secretagogue receptor on the pituitary to stimulate the release of growth hormone. Macrilen is an oral solution that is given following a 8 hour fast. Blood samples for GH are drawn at 30, 60, 90 and 120 min. The main side effect of Macrilen is a bad taste in one’s mouth (dysgeusia), with dizziness and headache also occurring. The FDA has set a cutoff for the Macrilen test of the peak GH level <2.8 ng/mL, although the paper in Journal of Clinical Endocrinology and Metabolism found that a GH level of 5.1 ng/mL gave the highest separation between normal and growth hormone deficient subjects. Dr. Friedman may start a trial of growth hormone on patients whose peak response between 2.8 and 5.1 ng/mL.

Dr. Friedman offers both the Glucagon stimulation test and the Macrilen stimulation test on Tuesday nights. If coming from out of town, let us know well in advance (at least one month) to process the pre-auth for Macrilen. If you have not seen Dr. Friedman prior to your visit, we will need an IGF-1 level and condition description including why you may be growth hormone deficient. You can have your appointment and stim test on the same night. You need to fast for 8 hours prior to both tests. Both tests can be scheduled on the appointment tab of goodhormonehealth.com. 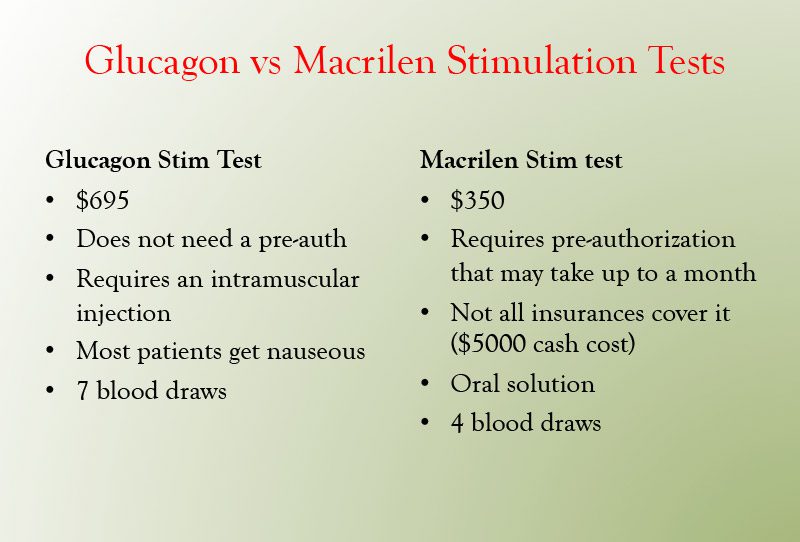 Once a physician has proven GH deficiency, he or she will begin the patient on GH and if needed, the dose will be increased until a final maintenance dose is reached. Dr. Friedman begins with 0.2 mg a day for men and elderly patients and 0.4 mg for women. Estrogens decrease the effect of GH, which is thought to be the reason why females need more GH. The hormone is given daily by a subcutaneous injection (in the stomach), usually at night. Small needles and syringes are used. The physician will evaluate the patient at four to eight-week intervals to ask how the patient is doing and to obtain a blood test which can help determine the correct dose. This test is the insulin-like growth factor test (“IGF-1 test”). It is a single blood test which reflects the amount of GH administered, although it is not GH itself. IGF-1 values which are low prompt giving a larger dose of growth hormone; values which are too high prompt a lower dose. Dr. Friedman likes to see the IGF-1 in the upper-normal range. Once a final dose is established, the blood tests will continue approximately every 4 to 6 months. The symptoms of GH excess include muscle or joint pain, retention of fluid (called edema) and carpal tunnel, which consists of pain and/or numbness in the hands. If these symptoms occur, it is likely that the dose is too high. In that case, Dr. Friedman will have you get an IGF-1 level, stop your GH for a few days, then restart at a lower dose.

Oral estrogens, such as birth control pills, premarin and oral estrace all block the action of GH at the liver. This leads to high GH (which can cause diabetes) and low IGF-1, both of which are detrimental. Estrogen applied to the skin (creams or patches) does not cause this effect. Patients on oral estrogens will often need two to three times the dose of GH. For these reasons, all patients taking GH should not take oral estrogens.

Most insurances require a prior-authorization for GH yearly, although some require it every 6 months. For Dr. Friedman’s staff to obtain the reauthorization, patients need to get an IGF-1 and have a phone appointment to discuss the benefits and side effects of the GH. Dr. Friedman suggests this to be done 1-2 months before the authorization is set to expire.

Deficiency of GH in the adult is well established and treatment with GH for those patients deficient in GH is approved by the FDA. On the other hand, it is illegal and may be dangerous to prescribe GH to those who are not deficient, and therefore, doing a stimulation test for GH deficiency is crucial. Most insurance will cover the cost of this medication, which is quite expensive, provided proper documentation on the necessity of GH treatment. Proper GH replacement therapy leads to improvement in most of the symptoms and body composition changes induced by this deficiency. GH replacement therapy for GH deficient adults is considered lifelong therapy.