What are the Optimal Levels of Vitamin D?

Vitamin D is in the news frequently. It has been touted as a wonder hormone that can prevent cancers, aging, heart disease, and other maladies. However, scientific studies showing that vitamin D actually prevents these conditions are rare. Many patients come to me confused about what their optimal level of vitamin D should be, especially as many more alternative providers have recommended very high levels of vitamin D. While these may not be dangerous, there are unlikely to be beneficial. These recommendations are not based on the literature or are related to association data.

The first thing to understand is the difference between association and causation with medicines. Causation means that if a person has a low level of a hormone and you give him that hormone, the condition improves. This is usually done in double-blind studies. For example, Dr. Friedman did a double-blind study giving patients with prediabetes high doses of vitamin D or matching placebo and carefully looking at their diabetes parameters such as their insulin resistance and insulin sensitivity. This was a large study with over 100 patients, and vitamin D was ineffective compared to placebo at treating the prediabetes. It had no effect on their insulin sensitivity and insulin resistance, and it did not prevent the development of diabetes from prediabetes. This was published in a very prestigious journal called Diabetes Care. These are the kind of studies that are needed to show that vitamin D deficiency actually causes a disease and that correcting that deficiency actually helps.

On the other hand, association studies are studies that measure a level of a hormone and show that people with those levels are more likely to have a certain disease. This has been done in the case of vitamin D in association with heart disease, diabetes, and cancers. This does not necessarily mean that in the patients having low vitamin D, the vitamin D level is causing the disease, it just shows there is an association. It is very hard to draw many conclusions from associations of disease and as has been pointed out by many researchers, patients with low vitamin D levels are likely to be sicker or inactive and outside less and it is those reasons that vitamin D levels may be associated with an illness and not be causing the illness. If you are going to use association date, it is good to look at association data that has used several thousand patients and has been reproduced. There is a database called NHANES that measured vitamin D levels and looked at association for diseases as well as cause of death. There is a very important paper published in a prestigious journal called Archives of Internal Medicine in 2008. The lowest association with all causes of death occurred when the patient had a 25-hydroxyvitamin D level (that is the form of vitamin D that is usually measured) between 30 ng/mL and 40 ng/mL had the lowest rate of dying. Patients with a vitamin D level less than 30 and greater than 50 all had a greater association with dying. This was especially true in females. The types of diseases they died from included cancers and heart disease for both the ones with low levels and high levels. Those with levels between 30 ng/mL and 40 ng/mL had slightly higher risk of dying, but it wasn’t significant Although it is true that more patients had low levels and the numbers were larger, the numbers associated with higher levels of vitamin D (> 50 ng/mL) and association with cause of death was still significant. 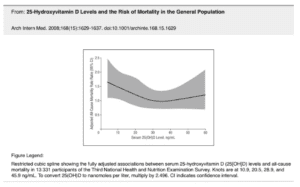 Therefore, if you are going to use an association data, the data is clear that it is best to have a vitamin D level between 30 ng/mL and 40 ng/mL.

Since it is easy to obtain that level, Dr. Friedman recommends patients to have a vitamin D level between 30 ng/mL and 40 ng/mL. If you go to another doctor and they say you should have your levels higher, tell that doctor, “read the literature”.