There are both definite and possible benefits and risks of estrogens. The definite benefits include 1) improvement of menopause symptoms, such as hot flashes, night sweats, vaginal dryness, insomnia, mood swings and depression and 2) increase in bone density leading to prevention of osteoporosis. Possible benefits of estrogens include a decreased likelihood of developing cardiovascular disease, improvement in lipids (cholesterol), decreased risk of colon and rectal cancer and a prevention of memory loss and cognitive decline. The definite risks of estrogens are endometrial cancer (reduced if progesterone is given along with estrogen) and blood clots. Possible risks include an 2 increase in breast cancer and gallbladder disease. A recent study (the HERS study) found that estrogen actually caused women who already have heart disease to have more heart problems in the first year of taking estrogen, than women who were not given estrogen. In the additional years of the study, both groups of women had similar incidence of heart problems. It is important to emphasize that this was just one study and only evaluated women who already had heart disease.

Estrogens also have side effects. These include worsening of estrogen-dependent diseases, such as uterine fibroids and endometriosis. Other side effects include breast tenderness and breast enlargement, vaginal bleeding, high blood pressure, nausea, vomiting, headaches, jaundice and fluid retention (edema). In general, the higher the dose, the more benefits and the more side effects are likely to occur.

Premenopausal women produce 3 biologically active estrogens, estrone (E1), estradiol (E2) and estriol (E3). Estradiol is the most abundant estrogen produced and both estrone and estradiol are potent estrogens. Estriol is considered a weak estrogen. Although little scientific data supports the claim, it has been postulated that estrone is a “bad” estrogen and may be the cause of estrogen’s cancer-causing properties, while estriol is a “good” estrogen and may protect against cancer. Estradiol is probably neutral. Oral estrogens, but not estrogens given by systemic routes (patch, skin cream, vaginal cream, under the tongue), are converted into estrone, with potential negative effects for the patient. Oral estrogens, because they are metabolized by the liver, likely exert different effects than systemic estrogens, which are not metabolized by the liver.

The most commonly prescribed estrogen is Premarin, which is a conjugated equine estrogen (CEE). CEEs are harvested from the urine of pregnant mares and contain 3 10 different estrogen components, many of which are converted to estrone.

Progesterone is usually given along with estrogen, because estrogen alone (unopposed estrogen) is associated with endometrial hyperplasia and cancer. Progesterone compounds substantially decrease this risk and are usually given along with estrogen to women with an intact uterus. What is less appreciated is that progesteronecontaining compounds have their own side effects and benefits. Some of the side effects include increased blood clots, rash, breast tenderness, weight gain, fatigue and somnolence, edema and nausea. Some of the possible (largely unproven) benefits (besides the reduction in endometrial hyperplasia and cancer due to unopposed estrogens) include prevention of osteoporosis, improved mood and better sense of well-being. Similar to the issue of estrogens, there are both natural and synthetic progesterones. 4 Synthetic progesterones are called Progestins and the most widely prescribed Progestin is Provera. Recently, progesterone itself has become available as a drug called Prometrium. It is postulated, but not proven, that natural progesterone is better for the patient than synthetic progesterone.

The tables below of different readily available estrogen and progesterone containing compounds may be helpful. These tables are not a complete list of all available preparations, but are a guide to commonly available hormone preparations. Again I recommend that your decision on whether to start hormone replacement and if so, what type of hormone replacement, be carefully considered and arrived at in conjunction with your physician. 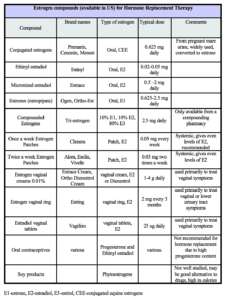 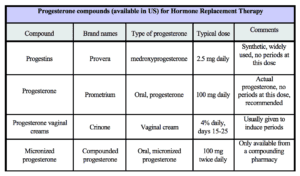 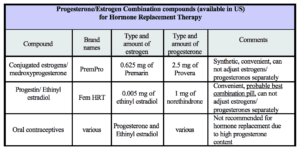